This is an example of the effects and use case for the Locale setting in the File block. When opening a CSV file, it matters what locale it was created in.

The file has different examples in it of how numbers might be formatted in different locales.

Omniscope only tolerates one character (locale dependent) for the thousand separator, and disregards it, wherever it appears. For English it's "," and for French it's a thin-space unicode character. In this CSV file there are examples of these cases, plus other examples of using "." or <normal space> as a thousand separator, seen in some other locales not demonstrated here.

Equally, Omniscope only tolerates one character for the decimal point. For English it's "." and for French it's ",".

If Omniscope sees any other punctuation or non-numeric digits, it will assume the column is text.

In the attached example IOZ file, we're using the Validate block to assert the expected output: 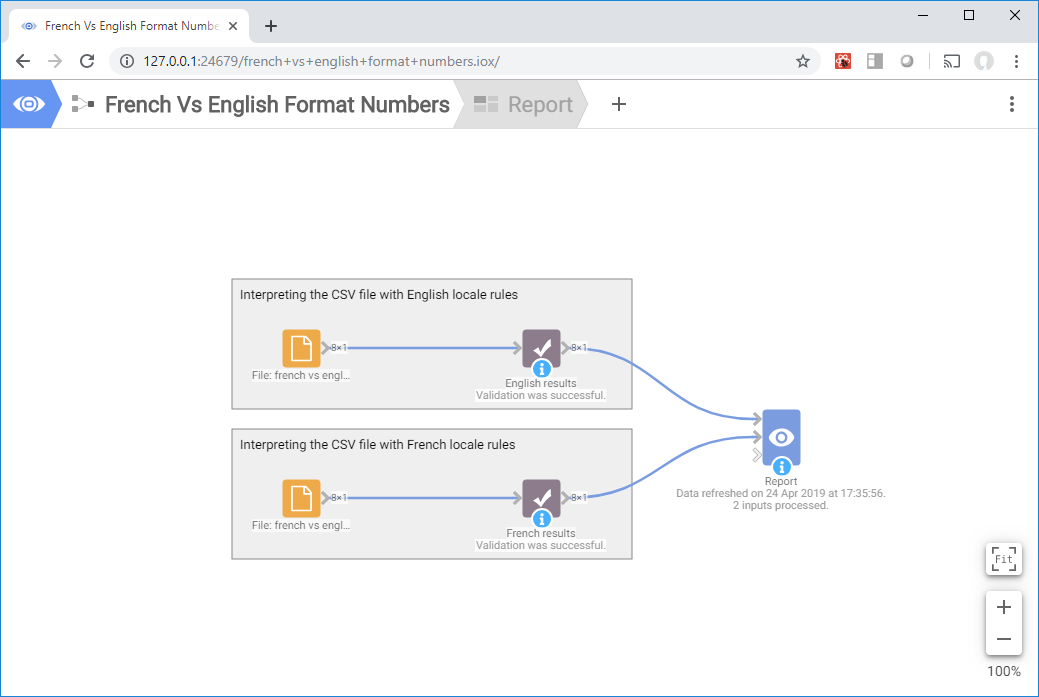 We expect Text for columns that can't be interpreted as numbers using the respective configured locale.

We expect Integer for the case of English locale interpreting the French formatted number "12.345,6" wrongly.

And we expect Decimal for all numbers which are interpreted correctly.

We expect 12345.6 for the expected successfully parsed columns.

We expect 123456 for the wrongly interpreted integer case (as above).

Note: the number format seen in the report, in the block data preview, and in the validate block text inputs, will be determined by the server's locale (e.g. in the UK numbers will be formatted like 10,000.0) irrespective of what the original CSV column or what the File block has configured. The File block option is purely about how Omniscope interprets the data. Thereafter it is always displayed using the server's data locale, which defaults to the system locale.

To recreate this example, download both the CSV and IOZ attached, into your sharing folder. Open in Omniscope Web and import the IOZ. (WARNING: the attached IOZ file will not work correctly if imported into a server on a non-English locale; the cell value validation rules will need to be reconfigured. This file also is not backwards compatible with anything but the latest daily builds.)